Chelsea and Matt’s wedding was so incredibly fun and joyful and we are particularly excited becauce Chelsea is a new member of the Chatham Station team. We love having her detail-oriented mind and creativity on board! On her wedding day to Matt, she was a vision of exuberance, and these two successful adults had the best day of their lives!

The pair met in Asheville, after Chelsea came north from Florida, where she grew up. They’re now settled in Raleigh with their beloved miniature Dachshund Maggie and a rescue cat called Binx.

The entire wedding party got ready at The Mayton Inn. Chelsea wore a lacy, off-the-shoulder gown that was exquisite on her. Chelsea’s mom helped her put on extra special details including a dachshund pin (for Maggie) given to Chelsea by her new mother-in-law, and a decorated horseshoe that her mother wore at her own wedding. It meant so much to her to have these items with her when saying I Do. The bridesmaids wore beautiful blush velvet dresses, with fluttery sleeves and flowing skirts. Matt’s groomsmen and groomswoman wore navy.

Chelsea appreciates, and excels in, presentation, and as a “Day of” wedding planner, the details and results of her planning were evident throughout the wedding and reception. They focused on having fun, but most especially family, and there were many personal touches.

Chelsea and Matt chose navy and blush with touches of gold as their palette, but it was the florals that had everyone talking. Roses in varying shades of pink, with greenery and touches of blue thistles adorned both tall and short centerpieces. Their simple and elegant three tiered cake also had touches of greenery, and it was displayed on a stand with gold intertwining gold rings atop navy lace linen, making it really stand out.

Matt walked down the aisle with his mom, and Chelsea was escorted her dad and stepdad. Both men have played such important roles in her life and she wanted them both by her side. It was extremely touching.

Chelsea’s step mom gave a reading for the ceremony, and we witnessed a lot of tears and laughter from everyone (including the bride and groom) when Chelsea and Matt read personal vows to one another. It was a lovely moment. Afterwards, everyone was ready to party. And they did!!

Guests found the seating chart on a boxwood champagne wall that said, “From this moment on.” It was a beautiful and functional backdrop.

Chelsea and Matt employed the Southern folklore tradition of burying bourbon on-site, prior to their big day to ward off rain. It must have helped, because the predicted 70% chance of rain turned to a mere sprinkle on the day. For the reception, we set up the patio with fun games to keep guests entertained during cocktail hour. Everyone enjoyed playing giant sized Connect Four, Jenga and of course, Cornhole.

Finally, at the end of the evening, these two were sent off into the married world with cheers, sparklers and smooches! 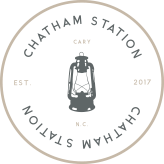